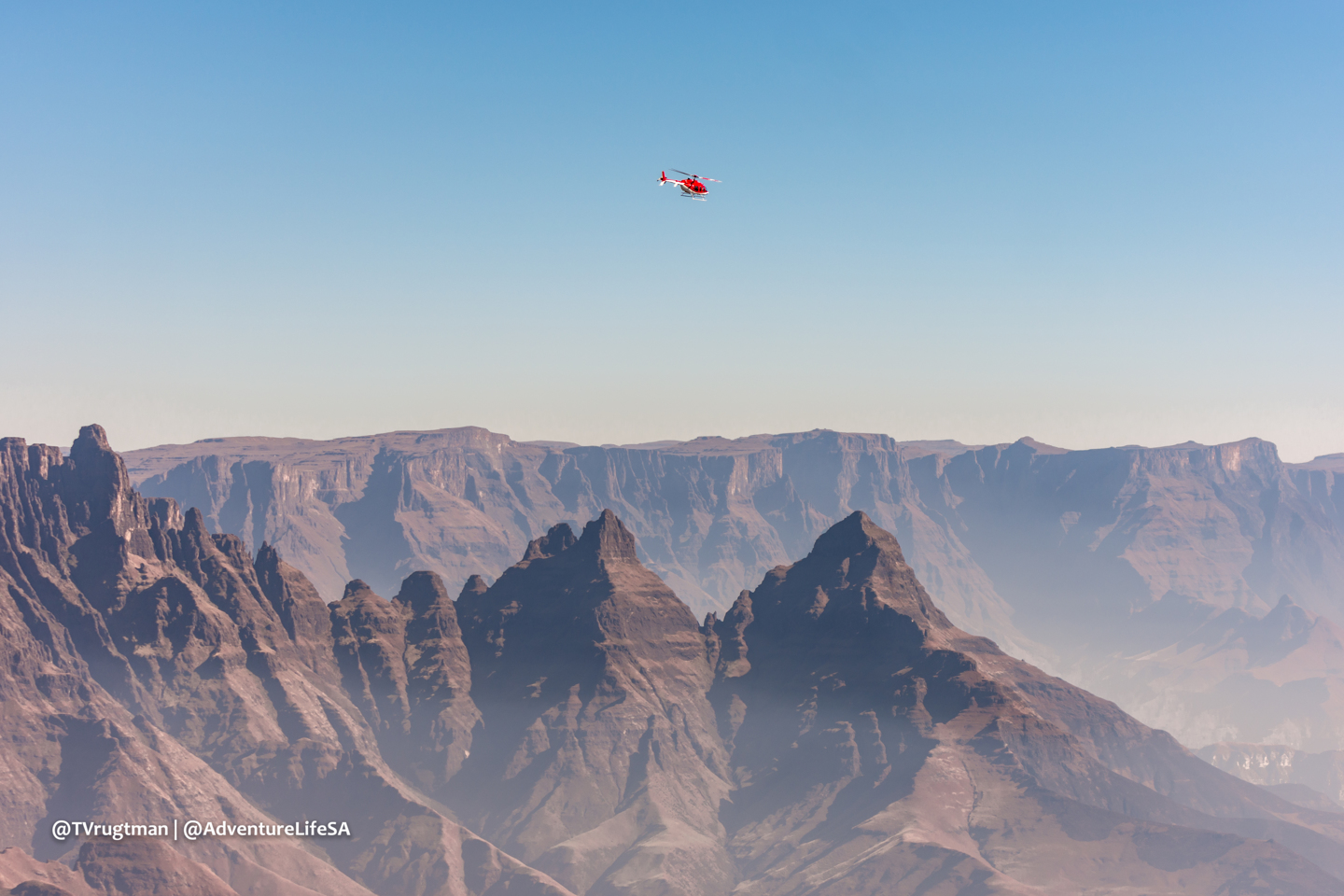 For me, a routine interruption is ever so often needed.  A change, a reset of inner senses or the loss thereof.  A little chapter of defining who you are, lost between the pages of the norm.

I often look at birds and wonder why they would spend their time in the city streets when they have the ability and freedom to soar the world.  Then, fifteen minutes later, I always come to the same conclusion or question; Why do we?  Now, the answer to that question is not always that simple, more rhetorical at times, but in reality, we create our own boundaries and live being captured in our own routines.  Some people like it, others don’t.  We all need to make a living, don’t we?  As long as we don’t forget to live. 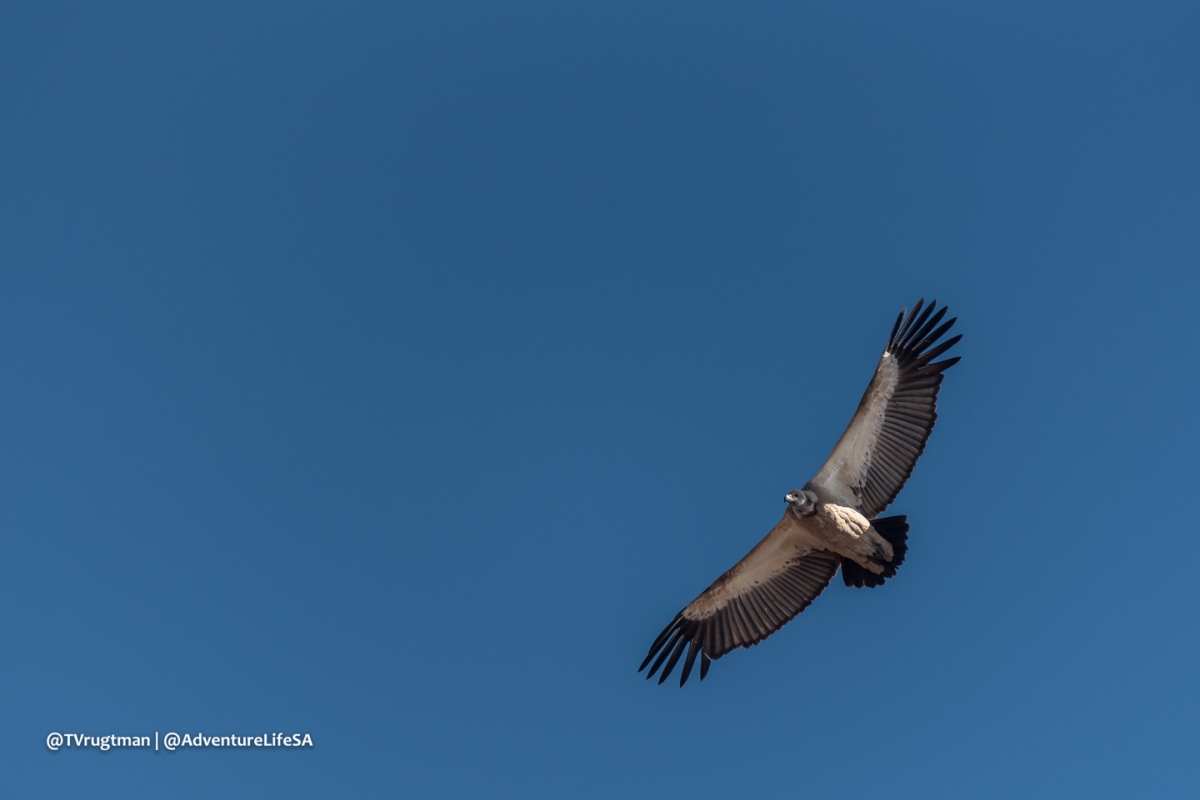 OK, that’s enough philosophy for one day, let’s get back on track with what happened in July 2018.

A few months back, while stumbling through life, I’ve noticed something out of the ordinary happening in the Drakensberg.  Cathedral Peak Hotel was launching an interesting concept of getting people back into the mountains while creating awareness for nature conservation.  The concept was to create a challenge that stretched over a couple of months, open to all, where you’d run (read: hike) and climb (read: upper body strength required) up to the summit of cathedral peak and stumble back down to the hotel as fast as possible.  It’s only a little ten kilometer stroll to the top, how hard could it be?

As this is a personal blog I’m not about to get stuck on the challenge details but please visit the cathedral peak website on cathedralpeak.co.za for details of how to get up there.  It’s a great initiative and anyone can do it. 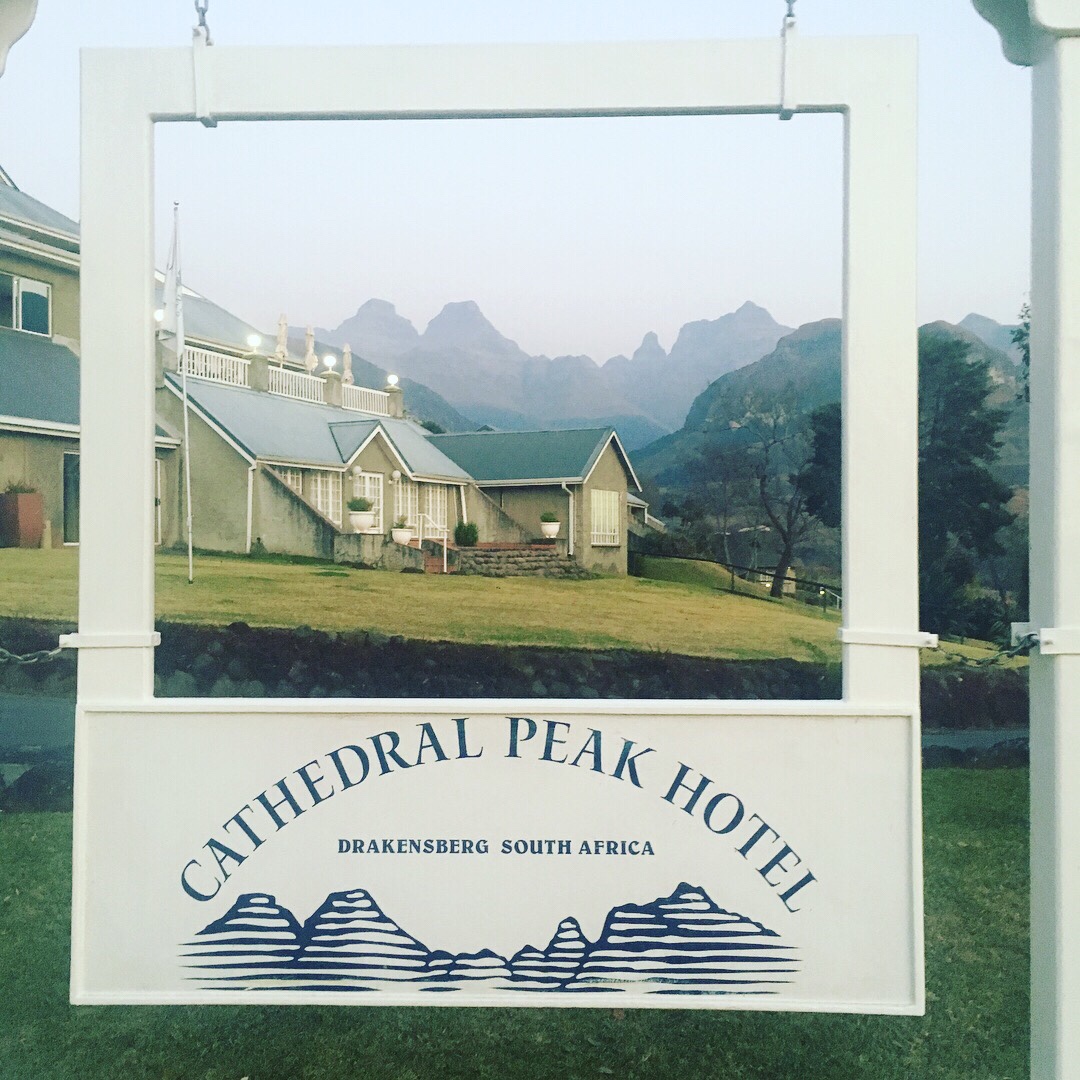 It was a good morning, fresh and chilly, but the ‘berg was showing off as it so often does.  The wind and the clouds were fast asleep while a few of runners were wandering around, trying to convince themselves that an earlier start was more rewarding than a comprehensive breakfast omelette.  Man, they were so wrong.

With the tummies in agony for not staying for round two of the breakfast buffet, we headed to the start of the challenge.  We met the lovely host, had more coffee, listened to a quick briefing as we missed the proper one the night before and got ready for lift off.  A spectacular bell rung and off we went, straight into the wrong direction.  A couple of whistles later and everyone got their bearings back in order, kind off. 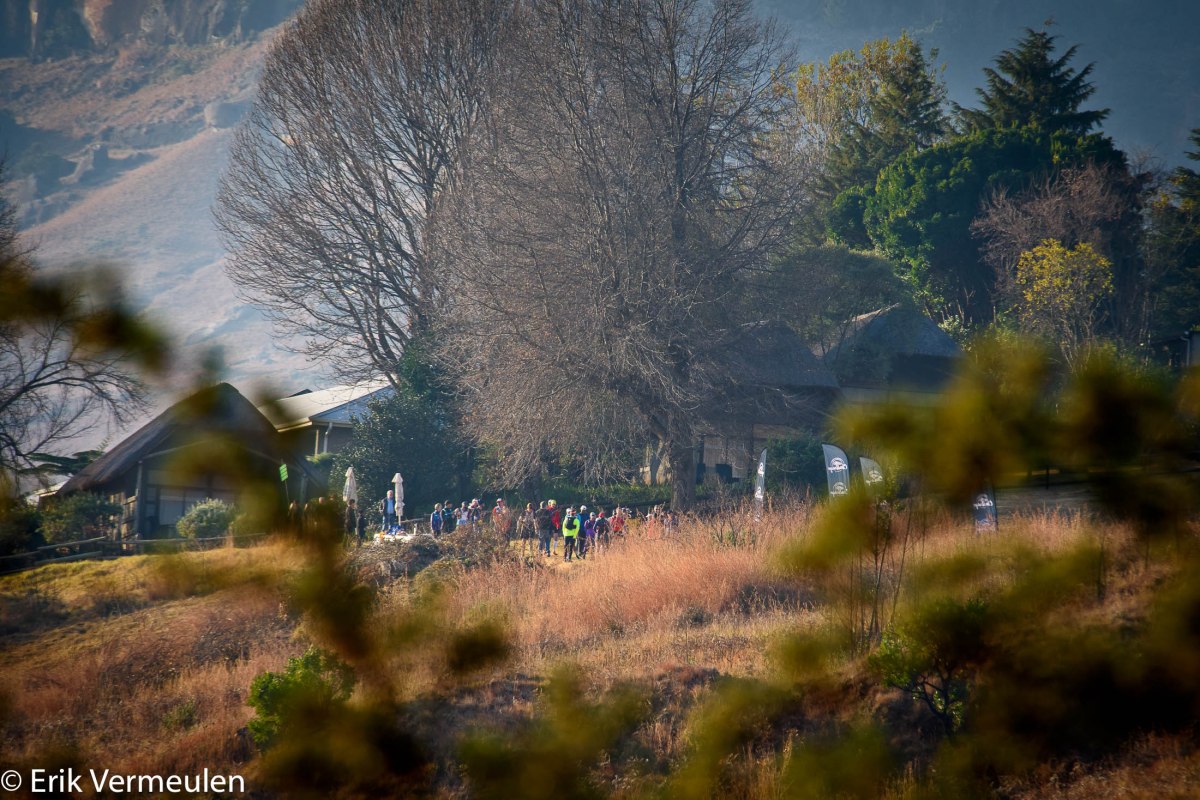 We started with a downhill though, it seemed strange.  You cross a river and that is really where all normal running activities come to an end.  From there on onwards you’ll wonder, why am I going so slow, why can’t I breathe, why am I walking?  Don’t worry too much, it only gets worse.  Now I know that sounds horrible, but the slower you go the more time you have to take in this magnificent landscape.  It needs to humble you for you to respect it, so don’t just think about the challenge, or the time.  Take a moment or two to take everything in.

Back to the run, it’s a hiking trail so there’s no need to worry about where the route is, it’s clear.  The Challenge Team organised members along the route to help with navigation where needed.  They’ve had fancy walkie-talkies and a helicopter which created the impression that someone took the whole “We need to keep them under a bird’s eye” safety talk way too seriously.  Anyway, running away from a chopper was fun, and they took some stunning photos along the way.

Up, up and up.  When you notice a ridge line in the distance and think that the route contours around it, it’s best to eliminate that thought.  Swan Hill is a proper example of that.  No twisty switchbacks, you just pick your line and you go for it, head on.  As fast as that may sound, it really isn’t, cause you’ll be going as slow as a tortoise on a Sunday stroll.  No really, we were kitted in racing gear but in reality there were two hikers on a guided walk towards the top.  It literally felt like a decade before we reached them on this section, and we only reached them at the top. 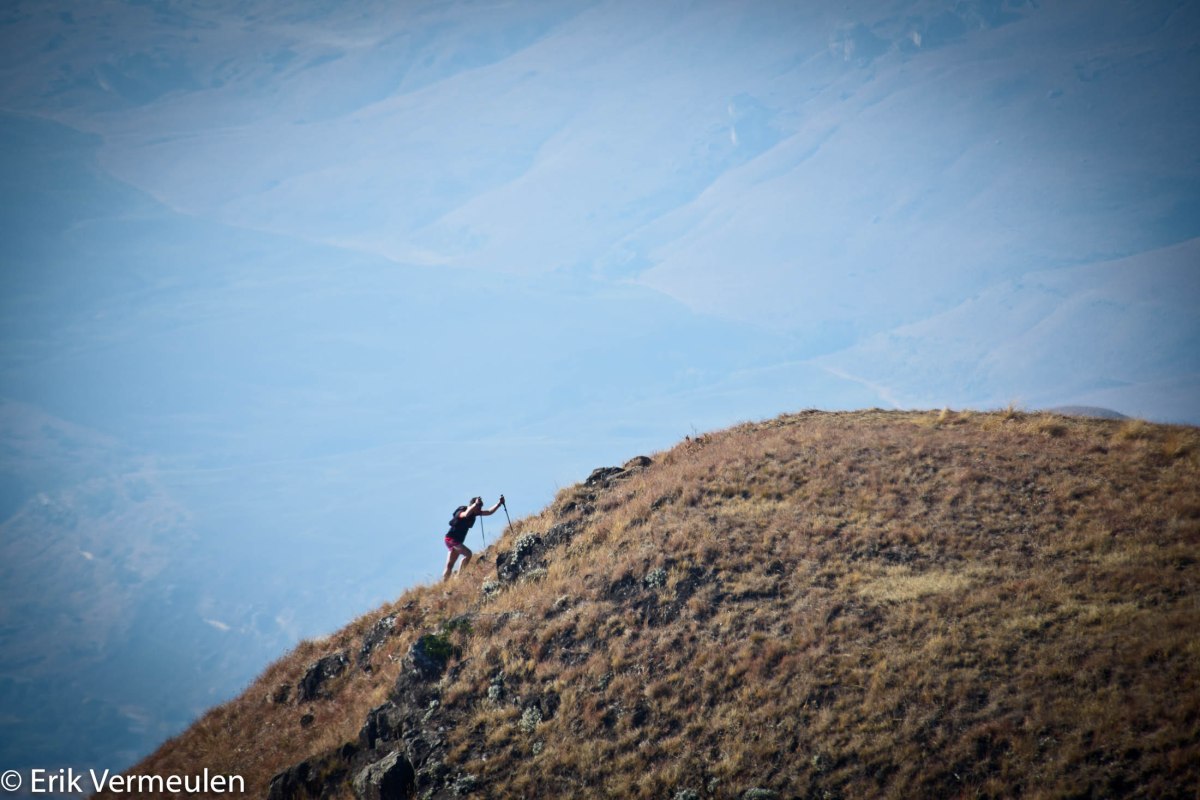 The ridge is just magnificent as the views become ever so more rewarding as you get closer to the top, not that you’re nearly there by this point, but you start getting in idea of that bigger picture.  To the left you can see the summit looming in the distance and to the right you get the sense that Orange Peel Gully is not for the faint-hearted either.  You start to realize how big this monstrous mountains really are, you feel so tiny.  The fun part about the ridge is that you can get a little bit of running in, as it’s not that steep, and you’ve got the best views to either side.  You can’t help not to enjoy this. 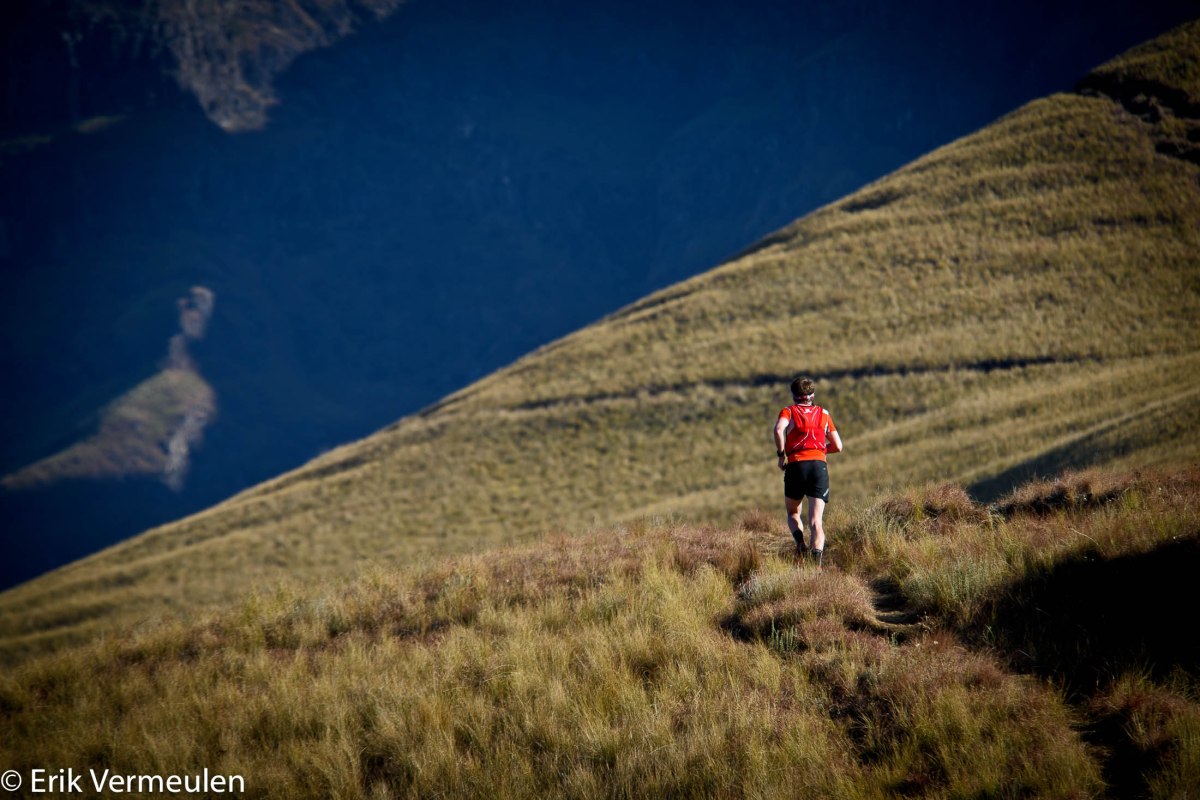 Orange Peel Gully, magnificent.  You do a bit of rock hopping while climbing through the gap between these two large land masses.  The landscape changes as all of a sudden it feels like being out in the jungle with vegetation being vastly different from before, proper snake territory.  The mountain hides you from the sun and with even a bit of snow left from an earlier cold front, it tickles your calmness senses.  If we were out on one of those guided hikes this would be my picnic spot.  Out and about in the sky, all shaded up, and having the view of the valley, way below. 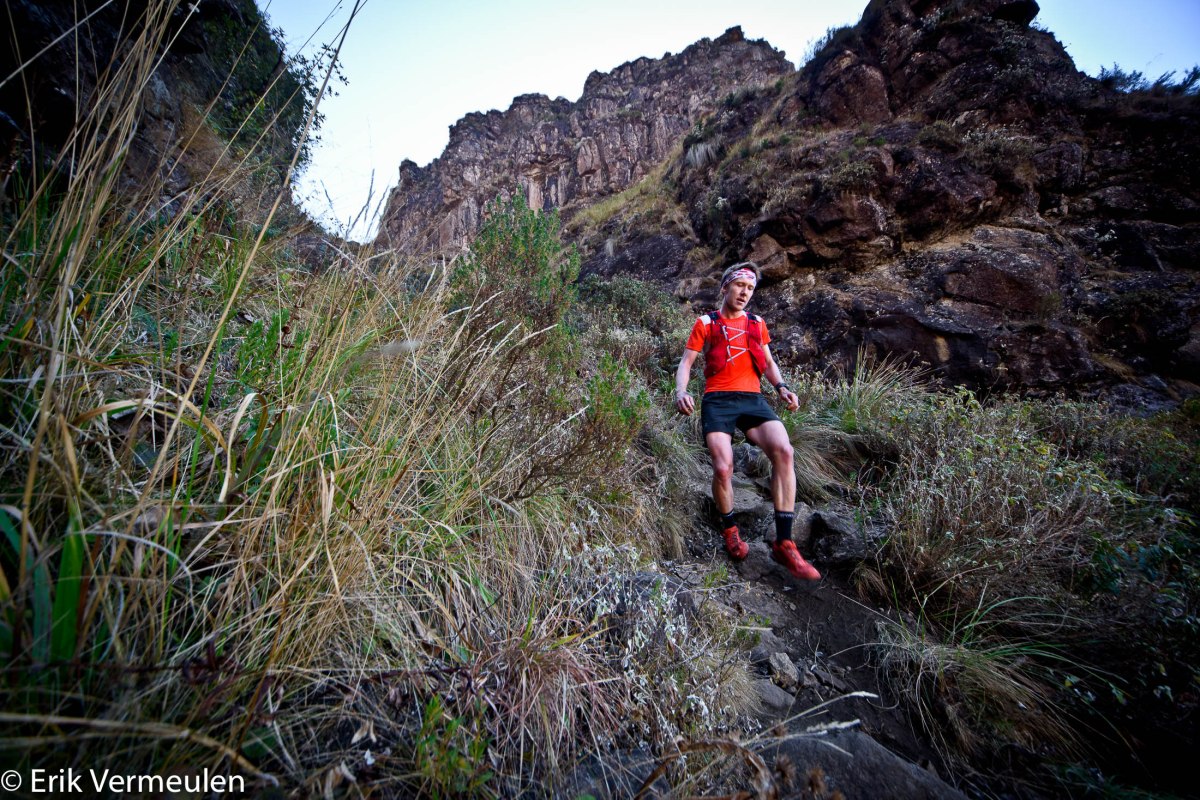 Pop your head out on the other side of the gully and you’d think you’re nearly there.  Reality check, you’re not.  Timing wise, they say you should be halfway to the summit when you reach this point although the distance may be a bit deceiving.  It isn’t deceiving, the next part gets brutal.

OK, before the brutal part starts you find yourself doing a bit of contour running.  A bit of a relief to the muscles after you’ve gained nine-hundred meters in altitude in the last six kilometers.  Enjoy it while you can as a bugger lies ahead.  Yes, called Buggers Gully for a reason you get that sense of “Oh bugger” when you look up and realize that the summit you’re attempting to reach is still quite a way above you.  The eroded gully is steep and the soft loose surface makes it difficult to negotiate.  It’s exposed up there and I can only imagine this gully being covered in snow when the odd South African cold front strikes.  Oh, what fun would it be to sail down there on skis.  Nevertheless, this in not Europe and this is not the reality.  But that’s OK. 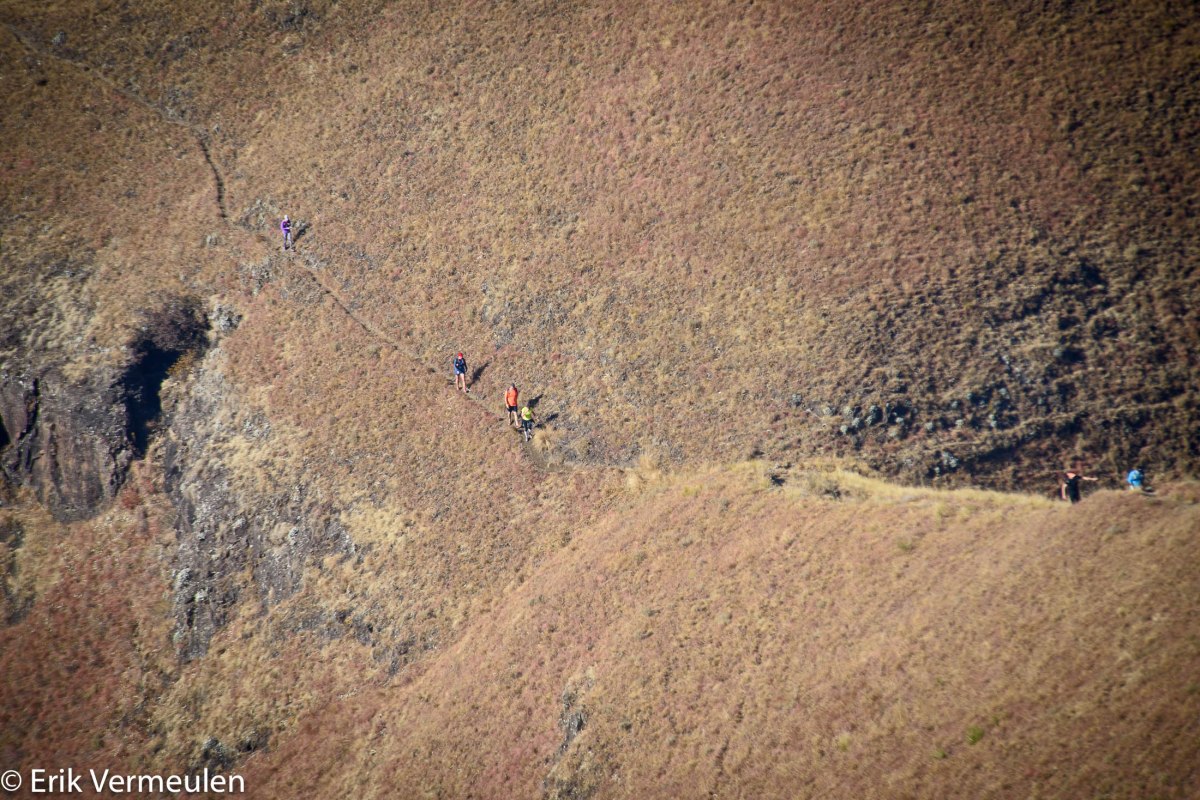 You pop up somewhere between a rock and a hard place and soon realize that the rock is where you need to get up on.  As a complete novice in getting onto stuff using ropes, and my arms, I was a bit rattled.  Things like crossfit, warrior races and weightlifting competitions crossed my mind.  Thank goodness it only crossed my mind and didn’t get stuck in there.  Just kidding, personally I’d guess this is where all those tire flips, bed-making rope swing moves and selfie taking poses comes in handy.  A real-life application for using your arms after all.  Nevertheless, I got the hang of it quite quickly, and literally, thanks to the mountain rescue guys that showed us the ropes.

As you move up beyond the crossfit section, you soon realize the you are way up there, high in the sky.  The final few steps of caution and you scramble towards a breath-taking moment of reaching the summit.  Literally breath-taking because you are hovering around 3000 meters above sea level, but also breath-taking in the sense that you’ve conquered what you’ve set yourself up for, a few hours back.

The view from the summit is a three-sixty degree one, not even a panoramic photo will do it justice.  A birds-eye view also doesn’t quite live up to its name, as this is eagle territory.  I took moment here, putting the clock on the backseat, putting the challenge on the backseat and putting life on the backseat.  It is really these out of the ordinary moments that defines us.  God gave you the pencil to write your own story, the good and the bad.  When the pencil gets all blunt, He sharpens it, but you keep on writing.  Only one day will you reflect on the chapters you have written, make sure it is words that you want to see.

The downhill back to the start was the fun part.  Loosen up, get nimble, and keep focus while imitating a gazelle being chased by a cheetah.  Jokes aside, you’ll probably reach a point where your feet move faster than what your brain can produce, but you’ll be fine. 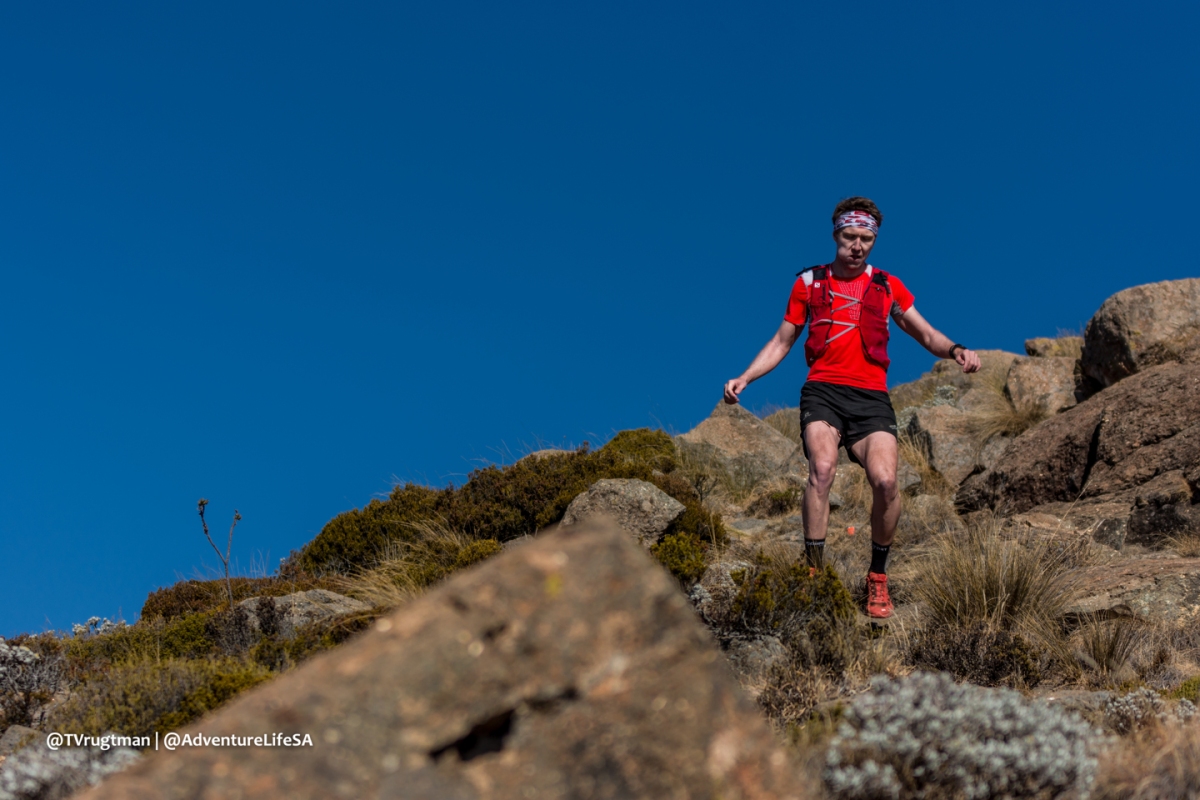 Go break a leg and live a little.

See you on the trails,

*A real thanks to Cathedral Peak Hotel, the Cathedral Peak Challenge Team and the brilliant photographers Terence Vrugtman and Erik Vermeulen for allowing me to use some of your photos.  Also thanks to Mike that accompanied me for most part of my run and to the guys and girl from The Trail Lab for the added experiences.