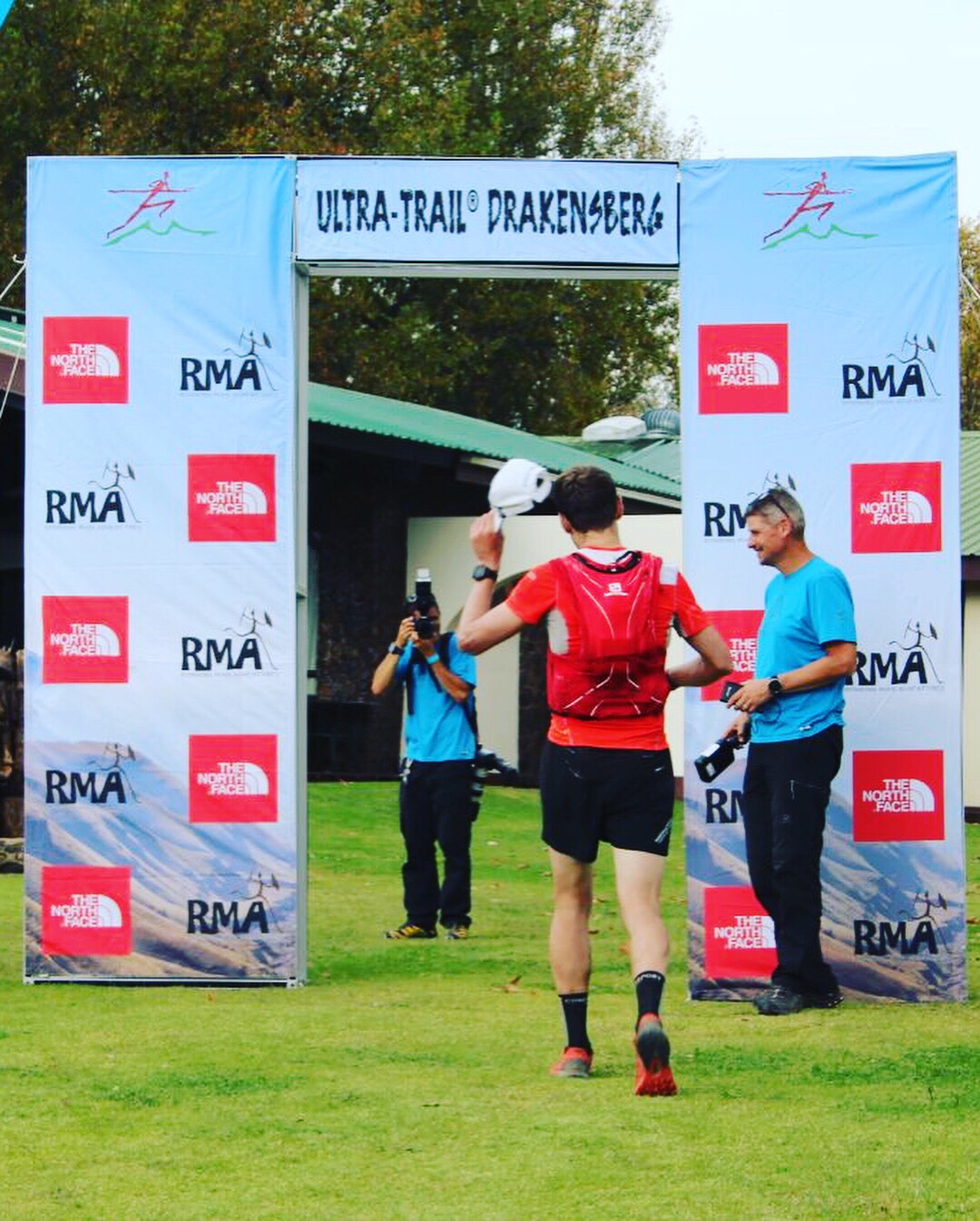 As opposed to the general race reviews being post-event I’ve decided to write this post with a little twist based on a conversation I had a few weeks prior to this particular event.  It reminded me of the scripture in Proverbs 16.9 “We can make our plans, but the Lord determines our steps”.

This post was written two-fold; The first part prior to the event, collecting some dust in the drawer while waiting upon the second part, which was written post-event, sharing my experience.

When I decided to enter for the Giant’s Cup Uncut sixty-two kilometer event I shifted my focus towards trail running and had to cut back on other activities and hobbies, simply because I did not have the available time to juggle everything at once.  The plan was to go out and smash the race as hard as I can, hopeful to break the eight-hour margin on this course through the Drakensberg mountains.  I had to be realistic in setting a goal and beating Christiaan Greyling’s 2017 winning time of six hours and forty-one minutes was just not realistic for me.  I thought I’d focus on my own race and set a goal in terms of time rather than position, which would allow me to see other competitors as allies and not enemies.

It started off well with running intervals high on the priority list, working on different energy systems and sky-rocketing the running fitness.  However, as warned by many, injury struck, which wasn’t part of my plan.  The result was that for the two months leading up to this event I’ve had to revert back to other alternatives and training methods, losing more and more focus and fitness as time rolled on.

The problem was that I’ve kept on looking down into this dark pit, trying to solve the problem in my own way, making more and more of my own plans to get around it, losing focus of the bigger picture.

While out and about cycling this past weekend [a week prior to the event] the all so familiar topic of cycling safety came up.  I was reminded of the Lord’s presence with the most fruitful conversation I had in a long time.  I again realized that He wrote the script for our lives long before we even started making our own plans.  He created the steps we were about to take as He created the bigger picture.

Ever thought of why you’d suddenly look around just in time to avoid being struck by a car at a traffic crossing, or why you’d crash in a certain way that eventually draws you closer to Him, realizing His plan is perhaps not your plan?  I was privileged to hear a little testimony from a somewhat stranger on how her life was changed.  A testimony that struck me deep, a testimony that made me realize that its not about my plan.

The bigger picture was to lose focus on the event, the winning time, my goal and my injury and to try and take in as much of His creation while out and about in His beautiful playground in the lovely Drakensberg.

With the bigger picture in mind we bombarded down upon the small town of Himeville the day prior to the event, staying at the lovely farm called Glencairn.  Registration, supper and sleep all went like smooth sailing but unfortunately waking up before sunrise was never high on my priority list and certainly doesn’t feature anywhere on my bucket list.  At least with an energy bunny and the eventual race winner in the house I’ve managed to pull myself out of sleep mode, had something to eat and headed towards to Sani Pass Hotel down the road, where our race was scheduled to start at 06:00 AM. 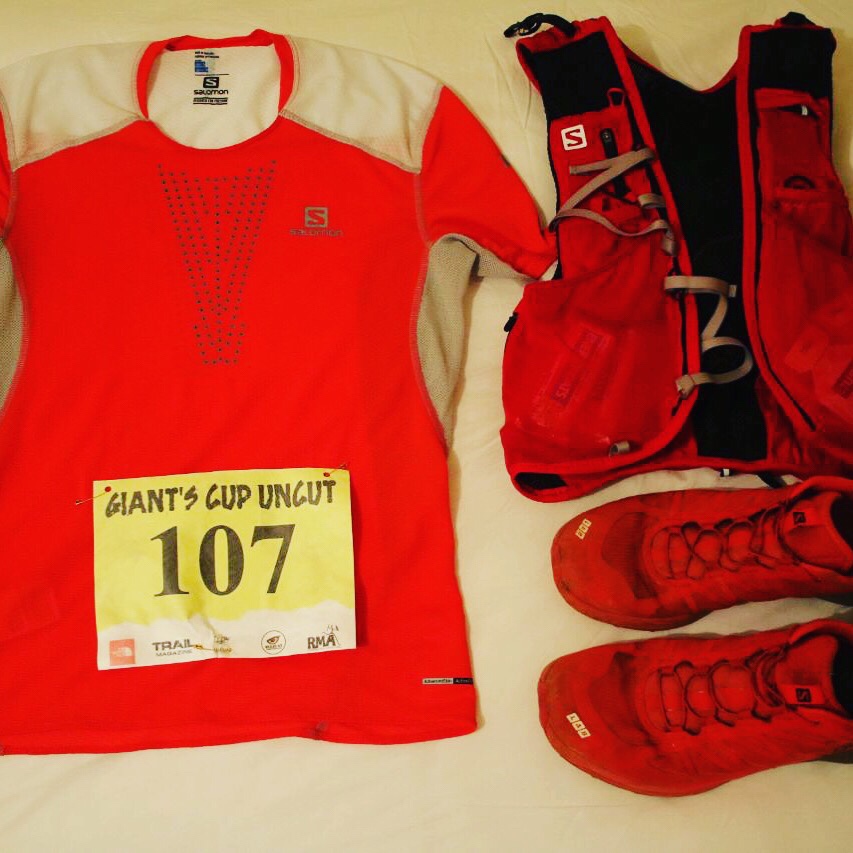 OK, let’s rewind a bit to the finer details of the event we lined up for.  It’s a sixty-two kilometer trail run called Giant’s Cup Uncut and it forms part of the Ultra Trail Drakensberg event that hosts a couple of race distances over the same weekend, stretching from twelve kilometers to hundred miles.  Yes, that’s not a typo.  The hundred-and-sixty kilometer route starts with going up the famous Sani Pass where after it takes the runners on a sixty kilometer loop in the mountains of Lesotho before heading back down to the hotel.  The last sixty-two kilometers of their route then joins up with the route we did, the Giant’s Cup Hiking Trail route.

Perhaps one day I’ll do a race report on the hundred-mile event, but for now I’ll stick to the sixty-two.

The sixty-two kilometer Giant’s Cup Uncut or GCU is essentially what the name suggest, the five-day Giant’s Cup Hiking Trail route being done in one go, the “uncut” part.  Compared to the monstrous hundred-mile race on the weekend the GCU is really only like a storm in a teacup but in terms of toughness all hope is not lost as you do gain quite a bit of elevation, more than the Comrades Marathon up-run for instance.

The map below should give you an idea of how the trail makes its way from the Sani Pass Hotel to the Bushman’s Neck border post a little bit more south of the equator.

As some people don’t really understand map contours perhaps this elevation graph is a bit more helpful.  With the average elevation around 1700 meters above sea level and maxing out at around 2100 meters above sea level, you’ll feel a bit more strain than running at sea level.  As for the folk from Gauteng I suspect the fresher air cancels it out anyways, so don’t break your head about it.  Rule of thumb, when you get dizzy you’re probably just tired so don’t blame everything on altitude, unless you’re in Nepal.  To summarize the Giant’s Cup Uncut route in the shortest way possible, we went up and down and up and down, five times.

We lined up before sunrise and out of all the participants you could spot the two morons from Pretoria from a mile.  The ones that didn’t have their headlights on their heads but rather tucked away in their backpacks.  The reasoning; We won’t be running into the night.  The reality; We started off running at night.  With just two minutes to spare I realized dawn was just about to break and opted to keep to the blindness plan.  Retrospectively, this plan did work as my mate Iain didn’t twist his ankle in the first hundred meters and went on to win the race on the day.  Congrats to him on that achievement.

A blurry photo of the two morons, one that won

As the race started in semi-dawn state, I said a little prayer and asked the Lord to amaze me with His creation, to open my eyes to see even the small things blossoming in between these massive mountains, to witness a little bit of that bigger picture.

The Lord never disappoints, it is only when we get trapped in our own little plans that we open ourselves up our own disappointment.

Yes, I was not running as initially planned but I enjoyed every second;

I saw how the grasslands and the mountains shared the same landscape,

I saw how crystal-clear steams winded their ways down to our idea of civilization,

I saw how Eland reacted when we stumbled upon their front lawn, I realized they survive only by His mercy,

I saw how the sky changed throughout the day, with clouds that headed in the direction He chose the wind to blow,

I saw eagles drifting in heat bubbles, heat bubbles caused by that same landscape, the wind direction and the temperature,

I saw small creatures forming part of that ecosystem,

I saw small stones under which these creatures live and large rock faces providing shelter for some other,

I saw flowers and trees, stones and mountains, bees and birds, insects and Eland,

I saw, I felt, and I realized, this was my opportunity to grasp a little bit of His bigger picture, cause not one of those things were there only by chance.

In the background the run went on, my support structure at the various water stations were tremendous and I couldn’t thank them enough.  They took care of their perceived perspective of my outer struggle, the outside failures I went through and the pain that came with it.  They helped me with nutrition, hydration, gear etc. and at some points I could hear that perhaps they were worried more than I was.  On the outside I was perhaps in a struggle, in pain, losing to my goals, losing to my plan.  But, in reality, on the inside, I was winning.

In the background, I finished the race

What I realized from this event is that when you focus not on your own little plan but focus entirely on Him, you’ll be left without words, you’ll be amazed.

Thanks for reading my little testimony.

Try to grasp a little bit of that bigger picture next time you’re out on the trails.